Keys to the Castle


Myself and two of my friends at work quietly sneak out of the office at 2:30pm hoping nobody notices the three of us are gone 2+ hours earlier on a Friday afternoon.  We beat most of the normal Friday evening traffic and are drinking a beer and eating some bad tacos in Leadville by 5pm.


We took my Jeep so we could navigate the 4-wheel drive trail that awaited us at the Castle Peak trail-head.  After navigating Independence Pass and cruising thru Aspen, we made it swiftly up the Castle Creek road and over the creek crossing which my lifted Jeep handled with ease.

We drove up the 4-wheel drive trail to a campsite with a couple waterfalls behind it somewhere near 10,750'.  A deer was across the trail as I pulled in and parked.  We set up camp quickly and were off to our tents by 9pm, trying to get enough sleep for our 4am start.

As I am retrieving a water bottle from the Jeep, I lock the doors and close the drivers door.  As it's swinging shut, I realize the key is still on the drivers' seat.

The door is shut.

My brain already knows, but tells my hands to feel my pockets anyway.  No key.  Now my brain goes deep into the east coast curse word thesaurus and after quickly shining my headlamp into the Jeep to confirm my suspicion I erupt into a volcano of curse words, all directed at myself.

I've haven't felt so dumb in a long time.  I just locked my keys in my Jeep, 15+ miles away from Aspen and the nearest cell phone signal.

Tim and Joel are quickly out of their tents and trying to help me assess the situation. 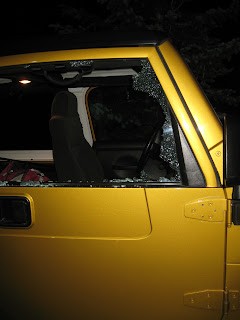 I briefly think of sending my wife a "custom" message on the SPOT, but she'll likely not know what it means since we never really discussed the purpose of the custom message.  I just usually send her OK messages on a certain schedule.

So quickly it's determined that a locksmith will cost a couple hundred minimum and require a 15 mile hike down Castle Creek Road in the dark, and I question whether the locksmith will even get up the 4-wheel drive trail to where we are at.

Plan B was:  hike till I get a cell phone signal and call my wife and have her (and the kids) drive up 5 hours one way to Aspen in the middle of the night to bring me the extra key.  Yep that's not happening.  Plan B sounded like shit too.

Plan C is break a window.  Obviously from the picture to the right, you can see that plan C was a success.

After taking a while to wake my partners, and eat a little grub, we are on the trail by 4:50am.

The hike up Castle Creek is easy to follow in the dark with headlamps and before we know it we are at the upper 4-wheel drive trail as day is breaking.

Playing talus ping pong, we pretty quickly lose the trail at 12,900' and have to scramble up a very steep, sketchy, scree slope with a bunch of loose rock.  It was only maybe 30 or 40 feet up, but it was a pain in the ass, and a bit scary with the moving rocks underneath.  This was my first introduction to the loose and shitty rock in the Elk range.  This is where I put my climbing helmet on.

I can tell that my friends, whom were on fourteener # 2 or # 3, were not happy with this slope.  I think they were silently wondering if it was going to be this way all the way to the top.  I think their nerves calmed a little when we re-discovered the trail we had lost and were back on somewhat solid ground.


Somewhere around 13,600' or slightly after this the trail turned into a scramble up to the ridge.

Once on the ridge there are two trails, one which stays on the top of the ridge.  One which ducks below the ridge to the climber's right.  We choose to go up the latter.  We discovered that this was the more difficult route later.  I would recommend that anyone facing this decision, just stay on the ridge.

The route below the ridge involved some steep / loose rock spots, a few minor class 3 moves, and rock fall danger from the ridge above to the left.  This is about 13,700'.  This is where Tim decided the route was out of his comfort zone and turned around.  Joel and I continued.

This lower route was not hugely difficult, but the ridge proper is certainly easier which we learned on the way down.

Regardless, we navigated the talus, the loose rotten Elk range rock, and some class 3 climbing and ended up back on the trail at about 14,000'.


At 14,000' we just stormed the summit with a fury and before long we were enjoying the beautiful weather and snapping summit pictures.

Joel tells me he is not interested in Conundrum, so I set out on this short 1/2 mile traverse by myself.


I hustle on my way up Conundrum since Joel is waiting for me on Castle.  This route has some tricky class 3 moves during the last 100 ft.  I gain this summit long enough to have another person on the summit snap a photo of me, and I am off, back to Castle Peak.

On my way back up Castle Peak, I got slightly off trail and this is something you do not want to do in the Elk range.

I quickly found myself in loose and moving rocks on a steep slope on the backside of Castle.  I realized my mistake and could see the trail, but to get to it was still a challenge.  Every step I took, rocks were moving, a lot of them.  I finally just pushed through it all quickly sending a few loose ones down the back side of Castle.

Believe the hype, the Elk range is shitty, loose, and rotten rock.

Back on the summit of Castle, I was beat, but I could see my buddy was itching to get off the summit so we continued down to the ridge before stopping for some food.

We met a nice couple from Austin, TX and shared the descent with them off and on the way back to camp.

The descent in the daylight revealed some beauty we missed by hiking up in the darkness.

Joel and I met back up with Tim at camp and apparently he'd gone exploring around the old collapsed mine that was up above the trail around 12,500'.  Amazing this even still exists after winters and endless rockfall.

The drive home was a blast.  We shared stories, jokes, and stopped in Leadville for dinner and a beer at a hidden gem just outside of town called "The Grill".  Best Mexican food I have eaten in Colorado.  Get the sopaipilla.

I dropped everyone off and leaving Joel's house en route to mine, I catch the remaining light as it disappears behind Longs Peak.  What an appropriate ending to a great day.