Lindsey - why take the easy route?


Mount Lindsey sits in the beautiful Sangre De Cristo range and is ranked as one of the more difficult routes even though it's relatively short at only 8.5 miles.  The difficulty ranking is due to two factors.
a.)  There is a significant amount of loose rock on the north face and in the gully.

b.)  If you choose to try to avoid this gully by climbing the northwest ridge, the climbing is more technical and is mostly class 3 on the ridge, but becomes a class 4 climb at the crux wall (pictured above).  There's significant exposure in some spots along this route too, where a loose rock or a poor choice or poor grip could result in serious consequences.

My wife and I had been talking about hiking a 14er together, and we decided on Mt. Lindsey.  She's got some experience, but prior to Lindsey, she'd only done 3 others (Handies, Huron, and Princeton).  My wife decided that she;d give it a shot, even though her Rheumatoid Arthritis had been causing her significant pain lately.  Along with being beautiful, she's a Colorado native, a nature lover, and a tough & stubborn Irish girl.  She refuses to give up ever and her perseverance would be on display most of the day during our climb.

We drove down to the Lilly lake trailhead the night before and after dodging deer, and navigating a 4-wheel drive road for miles, we just curled up and slept in the truck.  We woke at 4am and was on the trail by 4:30am headlamps illuminating our way.


When I was pulling my backpack out at 4:30am, I noticed that my headlamp had been switched on.  I thought it was due to me rustling around in my pack... but apparently the light had been on all night.  Thus, 15 minutes into our hike, my headlamp shuts off.  I think to myself "no biggie - I always carry extra batteries".  I stop, I look where I always carry two extra AAA batteries and I only have 1, not 2.  Preparation fail = bad me.

No sweat, Siona has a headlamp, so I just follow her closely.  It's difficult if I am in front of her because my body casts a shadow and I can't see a thing.  But for the most part, I navigate the darkness without a problem.  Creek crossings were a little eventful though.

Regardless, we navigate our way through the forest as the sun comes up and as we hit the tree line, we get a view of nearby Blanca Peak and Ellingwood Point.


So far things are going smoothly and we are making decent time towards our short term goal which is a saddle at 13,150 ft. between Mt. Lindsey and The Iron Nipple (a 13er).

We are both hungry, so we stop for a quick bite to eat in a chilly breeze at the flat area pictured below at about 12,900 ft.


After fueling up for the more difficult part of this climb, we race off through a boulder field (pictured below) that lies between the 12,900 ft. flat area, and the 13,150 ft. saddle.


When we reach the saddle at 13,150 ft. we finally get a good look at the class 4 northwest ridge route.  From here it looks quite intimidating.


So far we have clear blue skies and not a cloud in sight.  This would begin to change as we gained the ridge and began our class 3 portion of our climb.


Siona was struggling with the always present pain from her RA, but feeling ok at this point. However, just prior to gaining the 13,150 ft. saddle, she told me (60% sarcastically) she hated me for taking her on this route.  I would hear this a few more times before our day was done.


At the top of the crux wall, it was a short class 2+ scramble to the summit of NW Lindsey.  Here we could see the summit of Mt. Lindsey in the distance.

On the summit of NW Lindsey, I noticed clouds starting to build.  I knew we had about 2 hours before t-storms would be likely.  Siona was just making the summit of NW Lindsey as I told her we needed to pick up the pace in order to get the hell off this mountain before lightning came our way.  She understood fully and also told me she was already moving as fast as she could.  Just looking at her, I could feel her pain and wished I could do something to help.  I just offered encouragement, and told her she was kicking ass... which she was.

We both pretty much hauled ass over to the summit of Mt. Lindsey.  We took some time to enjoy the beautiful views, the weather, and prepare for our descent down the north face's gully that is filled with notoriously loose & dangerous rock.


We decided to take the gully down the north face, rather than down-climbing the class 4 ridge.  In hindsight, I might've reversed this decision.

The gully was dangerous, and we weren't the only ones in it on the way down.  There were two other groups also on the way down at the same time.  This makes rockfall potential in this gully even more likely.  And, we were the only ones out there without a climbing helmet.  Don't judge me.  Gear is expensive.  That being said, I have since spent the $60 on a helmet.

Anyway, our descent was slow because it was either climbing class 3 rock on the left (descending) side of the gully or sliding down some seriously loose stuff in the middle of the gully.  Both were slow going.

After descending the gully which I will probably never really want to do again, we bounced back down to the saddle at 13,150 ft. where I briefly thought of trying to summit the Iron Nipple (just because it sounds cool).  The weather had other thoughts with it's even crazier looking clouds now.


So, down the boulder field, to the treeline we went moving at a pace that was at least somewhat nice to my ailing right knee.  Until the thunder started....


About 5 minutes after taking the picture above, it started to rain for real.  We put rain jackets on just in time for it to stop raining.   Damn, Colorado weather, make up your mind.  As I think this, with little warning.... BOOM!!!!


Thunder clacks right above us.  We had just made it to the treeline, but the trees aren't exactly dense at 11,900 ft. or so.  We now are mostly running downhill, trying to get to the thicker forest at least as fast as possible.  My knee is hurting.... it's hot because my shitty rain jacket doesn't breathe very well.  We fly down this trail as fast as possible without going so fast that we'd injure ourselves.  Halfway from the treeline to the truck, the thunder was at least in the distance, but the rain picked up and was pouring now.

On our drive out, while thinking about how good a beer and some pizza sounded, I got going a little fast, and might have dropped a cheap plastic piece of the truck somewhere along the 4-wheel drive trail.  Oops.

On the dirt road past the 4-wheel drive trail, we did see mommy and baby deer hanging out which reminded us of why we do these things in the first place. 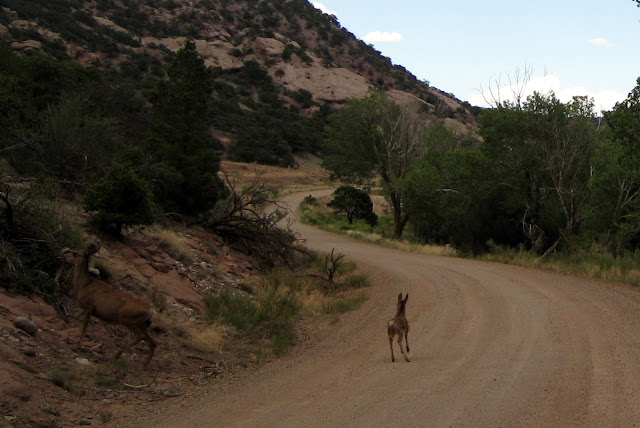