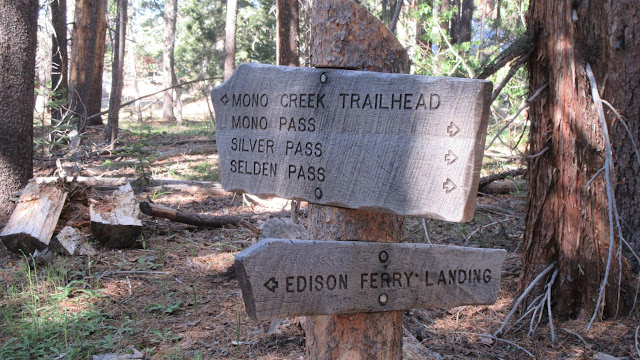 Leaving VVR this morning was a mixed bag. I was itching to get out of there since it’s a black hole where money goes to live. I ate four meals, bought a few things to supplement my resupply package, picked up a resupply package, drank five beers, bought a $7 shower, and paid $7 for laundry. After I bought a one way ferry ride back to the trail, my final tab was $169. That’s a little insane seeing as I spent less than 24 hours there.


At breakfast, Ziploc approached me and asked if I was leaving on the morning ferry without her, and I told her I was. She understood that I was tired of the drama, but asked me to reconsider. I just coldly said I would still be leaving on that ferry and that we may see each other somewhere down the trail. We hugged and she was crying, and it was hard for me not to cry too, but I didn’t. I didn’t know it at the time, but my tears about this were just delayed, but I’ll get to that later.

After the ferry dropped me off, I started hiking with some music playing in my earbuds. After an hour or so, I was back on the PCT climbing up Silver Pass, which I took slow just because I could. I was on nobody’s schedule but my own. By the time I reached Silver Lake, the music was annoying me, so I turned it off and just listened to the frogs. 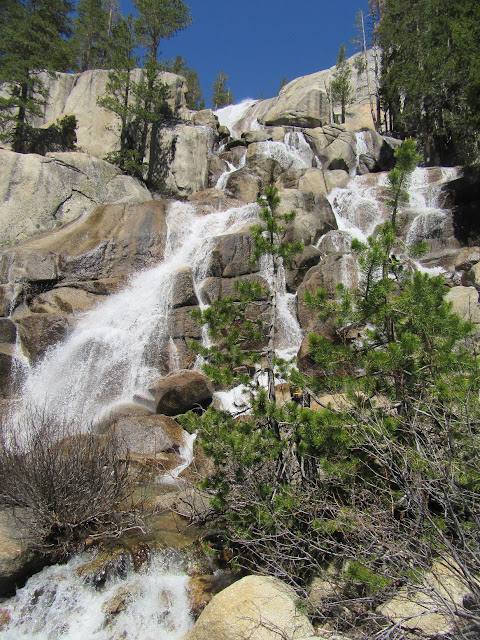 The climb up Silver Pass was long, but easier than I anticipated. I originally had some anxiety about some of the creek fords in this section, but the few I did today were all much easier than Bear Creek a couple days ago. When I reached the top of Silver Pass, I checked for a cell signal because I really wanted to talk to my Dad 1, but of course there was no signal. Instead I sat on a rock and just enjoyed the sun for a few minutes. 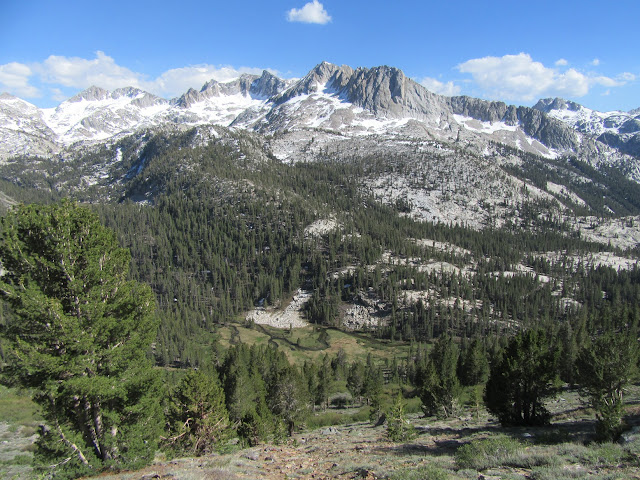 The descent down Silver Pass was less shitty than expected considering it was 2:00 pm and the snow was soft already. I post-holed a handful of times which added to the growing lack of skin on my legs. Mostly I was able to talus hop and avoid the snow until I found the trail again. I then raced past Warrior Lake, Chief Lake, and Squaw Lake just to avoid getting devoured by mosquitoes or having to do small talk with a batch of JMT hikers at Squaw Lake. 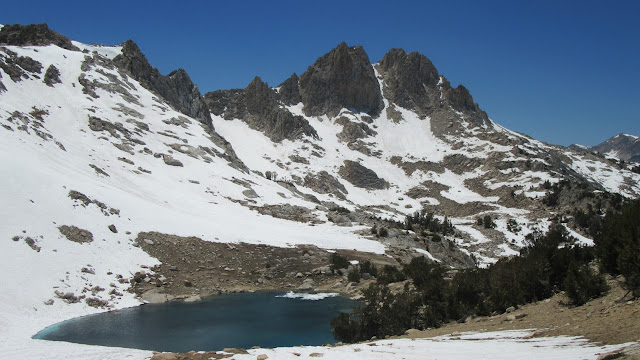 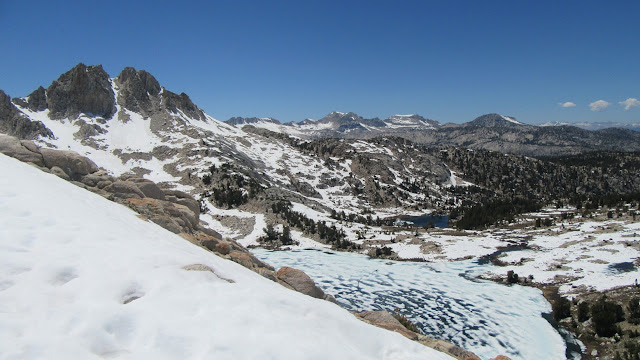 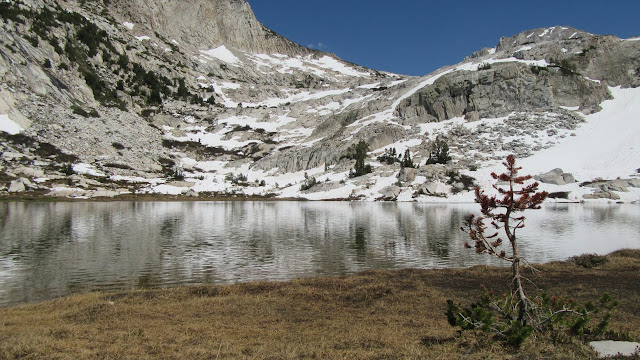 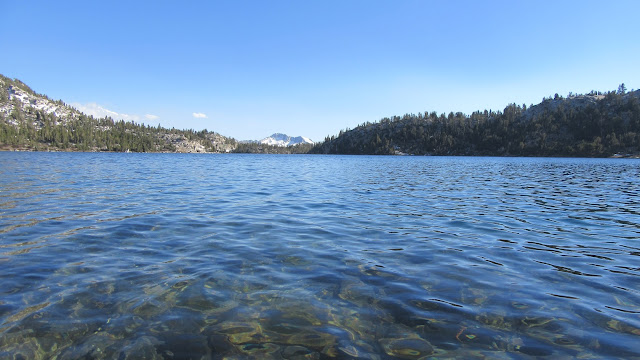 After reaching the junction with the Cascade Valley Trail, the PCT ascends steeply up to Lake Virginia. Hiking up 1300 feet in elevation over the next 1.5 miles was tough on the legs, considering I’d already climbed 3300 feet during my climb of Silver Pass. I arrived at Lake Virginia at 5:00 pm, which is the earliest I’ve stopped and setup camp in a long time. I relaxed in between doing chores of filtering water, cooking dinner, and washing my socks. The socks were already filthy since earlier I landed in some mud up to my calf on both legs. 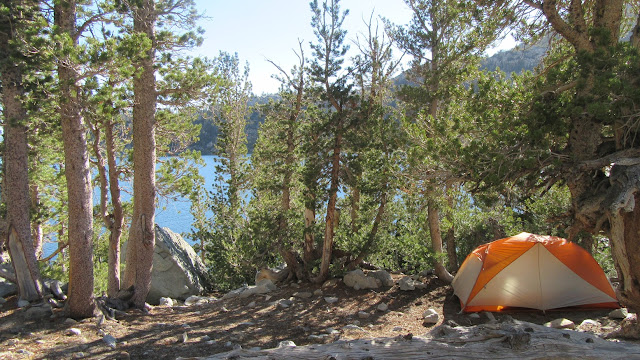 Second thoughts about how I was so cold to Ziploc came at camp that night. Ziploc’s passion for having a plan and sticking to it is something I understand even if I don’t always agree with it. That being said, she’s a good person and I treated her like crap just because I was frustrated with the drama surrounding daily plans. Before we hiked Mt Whitney, I promised her I would not abandon her in the Sierra since she didn’t have much mountaineering experience. And now I’ve done just that, I’ve abandoned her and I not only feel guilty for doing that, I also miss her company.

As I sat above Lake Virginia after dinner, watching the sunset and snacking on Oreos, it all hit me. I had such a great campsite with a beautiful view over the lake, yet I had no one to share it with. I laid in the dirt with my head on a dead log and wept about the fact that I was lonely. The tears were worse when I realized I only had myself to blame for this feeling.

I again had racing thoughts that were all over the place. I thought of just waiting for Ziploc to catch up so I could apologize. I thought about waking up really early and trying to hike so hard and long that I would collapse from exhaustion and have no time for my thoughts to swirl. I again thought of leaving the trail, but for what; I had the same empty feeling awaiting me at home. I thought of putting a bullet in my head to just have peace and to end the racing thoughts. I never have been able to escape my head. I have hiked almost 900 miles on the PCT, and I’m just as fucked up as when I started. The only difference is VVR has $169 of mine now.

At least I can listen to the cacophony of frogs tonight as I try to sleep.

(before watching thevideo below, turn on your sound and listen)

1. Your dad wanted to talk to you too.