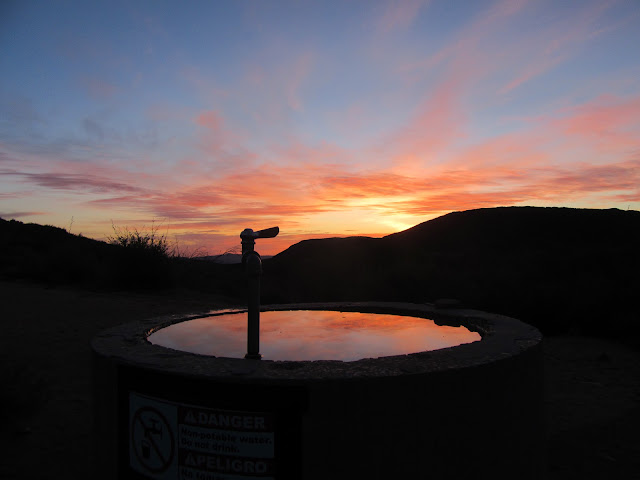 The stars last night was amazing! I may never use a tent again.

I awoke at 5:05 am and was on trail for a beautiful sunrise. By 8 am it was brutally hot already. I slogged miles under the relentless sun. Even though there was a ton of people on the trail, I hiked alone for the most part. I am noticing the PCT thus far anyway, has cliques.  So far I  have not really found “my group”.


About 7.5 miles in, I found a pile of hikers sitting by some trail magic where someone had dropped a cooler full of grapefruit. I ate one and took another for later. I only had 3.5 liters of water and a grapefruit to make it another 18 miles to Scissors Crossing where there is a reliable water cache. 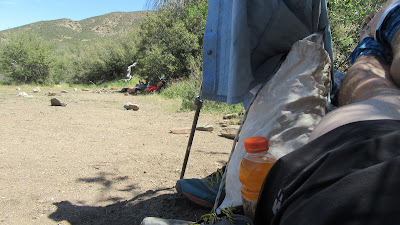 After 11 am, the sun was intense. I stopped and laid under a bush to get into the shade. I was lying two feet away from a pile of coyote shit and flies buzzed me for a couple hours as I tried to wait out the heat. I couldn't have cared less. The shade was golden.


Eventually my brain’s never ending urge to keep moving won out and I headed back into the sun and tried to make miles. I was seriously dehydrated and rationing water. I was down to 2 liters with 13.4 miles left to Scissors Crossing. I knew I was in a dangerous spot, and I hung all hopes on an off trail water source that was about 4 miles further on the PCT and 1 mile off trail. 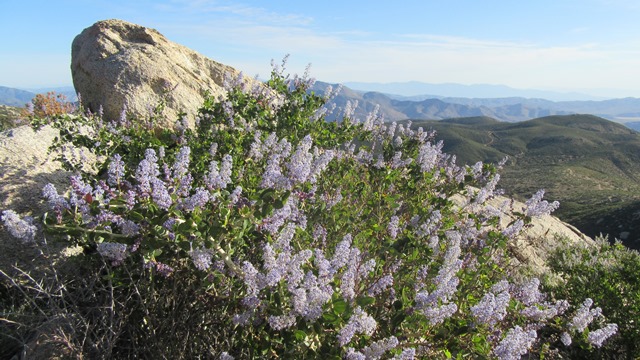 Hiking through the afternoon heat while rationing water was made slightly easier by sharing humorous conversation with a new friend, Tim. Tim is one of many people I’ve met from Germany. We bonded over our shared suffering and our hatred of spiders. 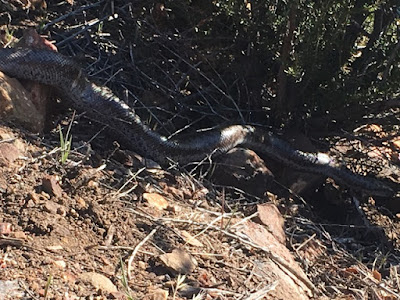 We luckily found water in what can only be described as a magical oasis.  We were engulfed in desert. Dirt and sand was everywhere. We hadn’t seen anything that even looked remotely like a water source for fifteen miles. Then we rounded a corner, and there was a field of green grass with a horse and a water tank that was fed by a beautiful spring. I drank three liters of water and filtered another 4 for the remainder of the hike to Scissors Crossing tomorrow. I learned a painful lesson today and probably had near heat stroke as a result. WATER IS GOLD!

Now here’s the confession part of this post. I left our camp spot at mile 52.6 this morning with 6.5 liters of water. I stopped about 5 miles into my day and looked at the water report again and thought it was likely that there was water cached 7.5 miles in. So, I made a gamble... a very bad gamble. I stopped and dumped 1.5 liters of water to lighten my load since my feet and ankles were in full suffer mode. Later that day, I would have paid $100 for an extra liter. To make matters worse, I learned later that 1/4 mile off the PCT from the grapefruit was a cooler filled with ice cold Gatorade. 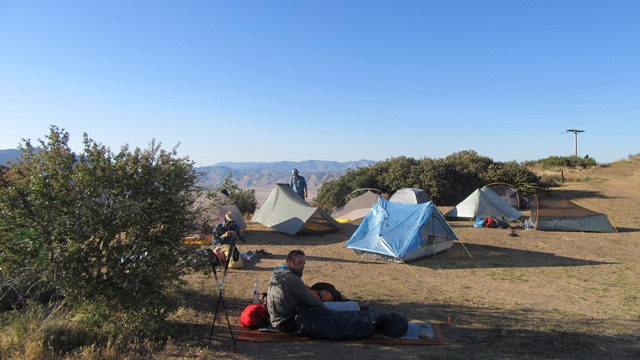 Now, I’m cowboy camped and thankful that my heat stroke was not too bad. I’m sharing this windy spot with a big group of hiker trash. There’s about 25-30 of us and it’s a group that is growing on me. I’m camped hoping I won’t have ANOTHER giant beetle crawl across me tonight. I’m also hoping the lone coyote several of us heard growling and saw at the water source doesn’t pay me a visit. And he'd better not fuck with my food bag either, I still have white chocolate M&Ms to eat.

I’m hoping to shower and do laundry in Jullian tomorrow. My light blue shirt is brown now. My socks make poofs of dust when I touch them.

After that, I have a whole new 24 mile section without water to look forward to. I am nearly 100% sure I am night hiking that section.

Below is the map showing Adam's spots - normally his campsites at the end of the day:  The red tent icon is his latest spot location (day 4).